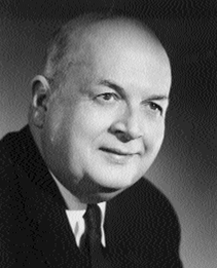 Born in 1911 in Mankato, Minnesota, Bill Plymat became an activist at an early age. In 1928, when Prohibition was failing, he formed the Student Sobriety Society in his high school to discourage drinking. The idea spread to 19 other Minnesota schools and received national attention.

Mr. Plymat received a law degree from the University of Minnesota and was admitted to the Iowa bar in 1937. In 1941 he became president of Mutual Surety Company of Iowa and vice president of the State Automobile Insurance Association, heading its bonding department. At State Auto, Mr. Plymat learned how drinking drivers caused heavy losses and higher rates for insurance. He realized that a company which insured only safer non-drinkers would be profitable and have educational value as well. This led in 1947 to the founding of Preferred Risk Mutual Insurance Company, which Mr. Plymat served as president and board chairman until he retired 30 years later. He was chairman emeritus until his death in 1993.

Mr. Plymat served in the Iowa Senate (1973 –1976) and on state and national commissions on drunk driving. He testified before many legislative bodies and his lifetime study of alcohol use gained him international recognition.