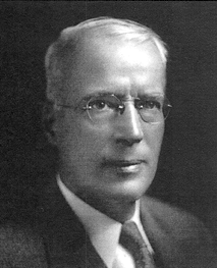 Mr. Koch’s insurance career began in 1905 when he was named as a director of American Yeoman Insurance Company in order to secure its debt to Koch Brothers Printing Co.

From this unusual beginning, Mr. Koch went on to become president of that company, vice president of Royal Union Life and president of State Life Insurance. He completed his insurance career by serving as president and eventually chairman emeritus of National Travelers Life from 1931 through 1956.

During his years with these companies, he also found time to serve as director of Town Mutual Fire Insurance and Allied Mutual Casualty Co. While being deeply involved in insurance, he continued to serve as president of Koch Brothers until his death in 1964.

Mr. Koch was elected president of the East Des Moines school board in the early 1900’s. You may not know there were two school districts in Des Moines at that time, East Des Moines and Des Moines. Mr. Koch was instrumental in negotiating the consolidation of the two school districts in 1907. It is apparent that Mr. Koch had an interest and commitment to education and, in spite of having only a high school diploma, Mr. Koch also served as a trustee of Drake University for many years.

Mr. Koch was very active in all aspects of Masonry and was serving in a national capacity at the time of his death.

What a testament to a gentleman born in Ontario, Canada, who emigrated to the Amana Colonies before settling in Des Moines and beginning his business career as a printer.