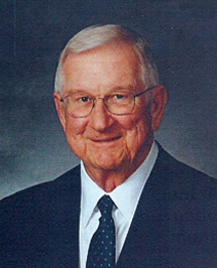 Bill Ambrisco was the successful leader of the Welt Ambrisco Insurance Agency in Iowa City for many years until his retirement. At the same time, he was involved in local and national industry organizations and an active member of his community and church.

Under his leadership, the Welt Ambrisco Agency grew to be one of the largest agencies in Johnson County and he was a top producer for numerous insurance companies. He is a role model and mentored many young insurance producers in the high standards of ethics that he lived by and that helped build the agency. In fact, three of the agents he mentored now are principals of the Welt Ambrisco Agency.

Mr. Ambrisco was a leader in the Iowa City community, serving on the city council for ten years and mayor of the city from 1986 to 1987. He was a member of numerous city commissions and involved in many civic organizations.

Mr. Ambrisco was the recipient of the Iowa City Sertoma Club’s Person of the Year Award, the Independent Insurance Agents of Iowa Agent of the Year Award and the General Will J. Hayek Award in 1995 (presented to a military veteran for community service.) He is an Army veteran of the Korean War.

A couple of people who wrote letters of recommendation for Mr. Ambrisco mentioned two of his major accomplishments were helping to persuade Dr. Emmett Vaughan to remain at the University of Iowa when the University of Nebraska recruited him two years after his arrival at Iowa, and hiring Larry VanderTuig as executive director of the Independent Insurance Agents of Iowa. Both of these gentlemen are prior Iowa Insurance Hall of Fame inductees, so it appears he certainly had an eye for quality.

Mr. Ambrisco and his wife Carly have three sons and five grandchildren.