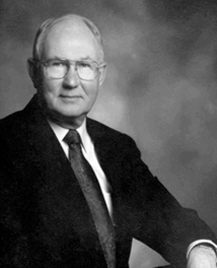 Willard D. Classen grew up on a farm near Hastings, Nebraska, where he was involved with his father’s farming operation. He earned a degree in agriculture education at the University of Nebraska at Lincoln in 1951. After graduating from college, Bill spent the next three years in the military, two of these in Germany. Bill returned to Nebraska after his military service, where he taught vocational agriculture and adult farmer classes for two years. It was during this time that Bill met his wife, Corky, who was a nurse in Hastings. They were married August 8, 1954.

In 1954 Bill joined the Rain and Hail Insurance Bureau as a special agent in the Nebraska-Mountain States Division. The bureau was a joint underwriting organization for crop insurance owned by a group of major insurance companies. In 1960 he was transferred to the Des Moines office as manager of that division. Then, in 1971 he became assistant manager of the bureau in Chicago and served in numerous capacities until the bureau was dissolved in 1980. With the dissolution of the bureau, Bill was elected the first president of Rain and Hail Insurance Service, Inc., and moved the company from Chicago to Des Moines.

Bill has had personal experience in nearly every facet of the crop insurance industry, from adjuster, field man, division manager and management of the corporate operations.

Bill’s managerial capacity, determination to excel and attention to detail benefited not only Rain and Hail Insurance Service, but the entire industry and the American farmer as well. He has served on several national industry organizations:

Bill has also demonstrated dedication to the local community by serving on the board of directors for Bankers Trust Company, Iowa Lutheran Hospital and Living History Farms.

While Bill devoted an extraordinary amount of his life time to the insurance industry, American agriculture and Rain and Hail, he also found time to help raise three children. The Classens currently live in Urbandale and maintain a close relationship with their two sons, Gregg and Mark, daughter Karen, and their respective families.

Bill is an avid gardener and is a member of the Masonic Lodge, the Scottish Rite, the Shrine, and Des Moines Golf and Country Club. He continues to be actively involved in farming through his corn and soybean operation in Dallas County.