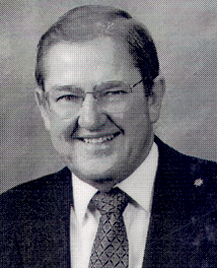 A founder and former president and CEO of Continental Western Life Insurance Company, Vinton Nutt’s professional career was founded on his belief that insurance products must be designed like a three-legged stool: they must be good for the client, good for the agent, and good for the company…in that order. Nutt is remembered for the leadership he demonstrated in building a fledgling company into a strong, successful organization; for the warmth, care and affection he freely shared with friends and colleagues throughout his company and the entire industry; for his vision to make the Continental Western campus a showplace for his community; and for the influential role he played in the development of the insurance profession.

Nutt served in the U.S. Army Medical Corps during World War II and was awarded the Purple Heart. He joined the Iowa insurance department as an examiner in 1952 and was named chief examiner just seven years later. Nutt began at Continental Western Life in 1966 as executive vice president and treasurer, and served as the company’s president and CEO from 1975-1990.

An avid golfer and devoted family man, Vinton S. Nutt’s professional integrity is a source of inspiration for generations of insurance professionals.