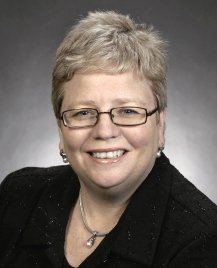 Susan received her BA degree from Simpson College and her J.C. from Gonzaga University School of Law. She has a distinguished career in public service in Iowa beginning in 1981 as an assistant attorney general. She successfully coordinated the 1993/94 flood insurance efforts for the insurance division following the 1993 floods.

In 1999, she was named first deputy commissioner, and then served as insurance commissioner from 2005 to 2013.

Susan was involved with the National Association of Insurance Commissioners (NAIC) for eight years in a variety of important roles, including chair of the market conduct committee and chair of the life insurance committee. Susan served as president of the NAIC in 2011.

As chair of the life insurance committee, she led the development of one of NAIC’s most important, complex and controversial initiatives, the principles-based reserving project. Additionally, she was a key voice in developing improved standards related to the design and sale of indexed annuities. U.S. consumers are better protected because of her work.

She served on several boards, including the Underground Storage Tank Authority Board, The Iowa Health Care Commission, the HIPlowa Board and HAWK-I Board.

Susan earned a reputation at the state, national and international levels for her open, transparent and responsive style. She was well-known for her willingness to listen to all constituents, and for her balanced point of view on insurance regulation, fairly representing both consumers and the insurance industry in Iowa. Perhaps the best testimony to her even-handed approach is that she was first appointed Commissioner by a Democratic governor, and then was reappointed by a Republican governor.