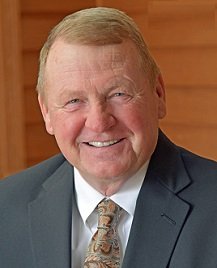 Steve was born and raised in Sumner, Iowa, one of three children of Cal and Iris Harms. After graduation from Sumner High School, Steve attended Upper Iowa University in Fayette, Iowa, where he played football and in 1973 earned a B.S. degree in physical education. That same year, Steve married a fellow Upper Iowa graduate, Diane Kay Kinkead. Their family now includes five children and eight grandchildren.

After graduation, Steve taught high school biology and coached multiple sports teams in Grinnell, Iowa. He also officiated basketball games at both the high school and college level. During this time, Steve’s father Cal, who had sold crop insurance for over 30 years at his Sumner, Iowa, agency, suggested that Steve work part-time as an independent crop adjuster for Rain and Hail during the summer months.

After three years working as a part-time adjuster, in 1976 former Rain and Hail president, Bill Claussen offered Steve a position as full-time field supervisor, which he accepted. This was the beginning of Steve’s successful and distinguished career in the insurance industry.

It is impressive and inspiring to read how Steve’s career began by being a part-time adjuster beginning in 1973 to retiring as president and chairman of the board for three affiliated companies in 2012.

Business highlights during Steve’s career include guiding his own company from a small insurance bureau to leading the largest agricultural insurance company having over $2.0 billion premium volume when he retired. Other accomplishments include testifying before Congress regarding the importance of the federal crop insurance program and serving multiple roles in national crop insurance associations.

In addition to enjoying their five children and eight grandchildren during retirement, Steve and Diane remain strong supporters of Upper Iowa University through service and philanthropy in their efforts to give back to their alma mater.