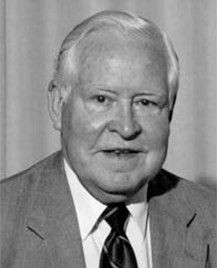 Robert “Bob” Houser graduated from the University of Iowa in 1947 with a Bachelor of Arts degree in actuarial science and began his career with The Bankers Life Company (now known as Principal Financial Group), in the actuarial department. He was elected assistant actuary in 1953 and later was promoted to various actuarial positions, including senior vice president and chief actuary. He was elected president of the company in 1973, president and CEO in 1975 and chairman and CEO in 1982. Bob retired in 1984 from Bankers Life, and remained a member of the board of directors until 1992. His leadership and impact at The Bankers Life and in the insurance industry is still felt today.

Professionally, Bob is a Fellow of the Society of Actuaries, a member of the American Academy of Actuaries, and past president of the Actuaries Club of Des Moines. He was also actively involved in various actuarial and industry boards and committees, including the American Council of Life Insurance and the Health Insurance Association of America.

Bob’s commitment to the community is exemplary. He served in numerous volunteer leadership positions, and has significantly impacted the quality of life for not only students, but people of all ages. Examples range from leading the United Way of Central Iowa as its chairman to heading the effort to build the State Historical Building. He served on many college boards and foundations, including Drake University, Mercy Hospital Medical Center, Iowa College Foundation, Greater Des Moines Committee, Civic Center of Greater Des Moines, Iowa Venture Capital Fund, Bethel College & Seminary, Greater Des Moines Convention and Visitors Bureau, Golden Circle Development Corp. and Community Focus. Bob has been president of Des Moines Development Corp. and Greater Des Moines Grand Prix, Inc. and chairman of Business and Education Roundtable.