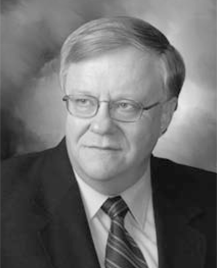 Robert “Bob” Fulwider graduated from Iowa State University with a Bachelor of Science degree in agricultural education in 1967. After teaching high school vocational agriculture for three years, he returned to Iowa State where he obtained an M.S. degree and completed course work towards a Ph.D in higher education administration.

Bob joined the family insurance agency in West Liberty in 1973. During his insurance career, he has worked tirelessly on behalf of independent agents at both the state and national levels. Bob served on the executive committee of the Independent Agents and Brokers of Iowa (IIABI) for 13 years, as president in 1991 – 92 and as state national director from 1998 to 2002. He has received both Agent of the Year and Chairman of the Year awards from IIABI.

Bob has chaired a number of committees for the Independent Insurance Agents and Brokers of America (IIABA), including farm agribusiness, personal lines, market development and government affairs. He represented IIABA on the USDA commission to improve the federal crop insurance program and was invited by President Clinton to represent IIABA at the national rural conference. He has received two presidential citations for his national committee work and in 2003 received the Sidney O. Smith Award, the association’s highest individual government affairs honor. He currently serves on the IIABA executive committee.

Bob is past president of the local chamber of commerce and the community center complex. He has been a scoutmaster for 23 years and is active at the district and national level with scouting. In 1988, he received the Boy Scouts of America Silver Beaver Recognition, the highest award in scouting. Other community and business awards include the Phipps Outstanding Young Educator Award (1969), Kiwanis International Award for Outstanding Contributions to Drug Abuse Education Programs in Public Schools (1972), and the Iowa State University Outstanding Young Alumnus Award (1978).