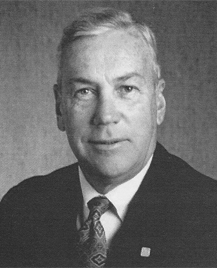 Bob Dee began his career with Holmes Murphy and Associates, Inc. in 1960 as an account executive. He led the bond department at the agency for many years and became president of the company in 1978 following the untimely death of Ray Murphy. He served as president until 1990, at which time he became chairman/CEO until his retirement in 1993. During his tenure as president, he added additional offices of Holmes Murphy, including the Texas office.

Under Mr. Dee’s guidance, Holmes Murphy became a leader in insurance and surety bonds for the construction business and provided these services for many contractors in Des Moines, Iowa, and beyond. He was active in bonding associations nationwide, serving as president of the National Association of Surety Bond Producers.

Mr. Dee worked to provide continuity to the agency by designing programs of ownership and management succession that encourage retention of a team of experienced agents.

Mr. Dee has been deeply involved in the community, serving on numerous boards and committees of not-for-profit agencies like United Way of Central Iowa and the Civic Center, both of which he served as chairman. He was president of the Greater Des Moines Chamber and is presently a member emeritus of the board of the Greater Des Moines Charitable Foundation. He has also been active in the Catholic community of Des Moines, chairing fund­raisers for his parish, the diocese of Des Moines, Dowling Catholic High School and Bishop Drumm Retirement Community.

Mr. Dee was honored as the recipient of the National Conference of Christians and Jews 1986 Brotherhood Award.

Mr. Dee and his wife, Sharon, have four children and fourteen grandchildren. They split their time between Florida and Des Moines.