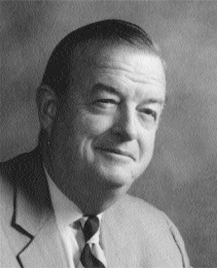 Robb B. Kelley, CPCU, graduated from Dartmouth College in 1938 and spent his career changing the shape of the future for the people with whom he worked, for the insurance industry, for Des Moines and for the state of Iowa.

Mr. Kelley began his association with Employers Mutual Casualty Company in 1939. Under his visionary direction from 1962–1992, the small casualty company flourished and became an all-lines property and casualty company licensed in 50 states with numerous affiliates and assets of more than $1.5 billion. He is a past national president of the Society of Chartered Property and Casualty Underwriters, a former governor and trustee of the Insurance Institute of America/American Institute for Property and Liability
Underwriters and past chairman of the Alliance of American Insurers.

Mr. Kelley is a past chairman of the Drake University Board of Trustees, past president of Iowa Methodist Medical Center and served on the board of Living History Farms for 23 years. He has received a host of honors, among them the Brotherhood Award for Distinguished Leadership from the National Conference of Christians and Jews, and the Alexis de Tocqueville Society Award from the United Way of America.