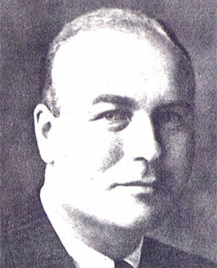 R. W. “Mickey” Forshay resided in Anita, Iowa, and operated a well-respected multilines independent insurance agency serving southwest Iowa. Today it remains one of the largest agency operations in western Iowa. He is one of only 3 Iowans ever elected as president of the national association which represents insurance agents.

A graduate of the University of Iowa, he joined his family’s insurance business in 1923. For a number of years, he chaired the National Rural Agents Committee, focused on the insurance needs of American’s rapidly growing and changing agricultural community. His focus of rural fire prevention put him as a leader before his time as he championed the use of the Underwriters Laboratories testing of items used by farmers and homeowners.

He helped promote the creation of rural fire departments as we know them today.

R. W. Forshay was one of the few men in the insurance business in the early 40s who applauded and endorsed the creation of the National Association of Insurance Women. During an appearance in a meeting with the Insurance Women Organization on June 26th, 1942, he spoke eloquently to this fact. He acknowledged women were stepping forward during the war effort by exerting “everyday conduct of the insurance business, you were, in effect, completing your ‘basic training’ for the extraordinary wartime service you are now called upon to give.”

He believed that women would be playing an important role in the future of our industry, and that during the time of war, the country needed their involvement in the insurance business more then ever.

In an article printed in the January 10th, 1942, prominent national magazine the United States Review, Mr. Forshay outlined a plan he helped create to provide “fire defense” on the home front during World War II. The “V-Plan for Insurance” was created by Mickey and other fellow agents in Kansas City in October of 1941.

The program brought together the entire insurance fraternity to coordinate the industry services to eliminate waste in duplication. It also provided war peril coverage plans for America’s businesses.