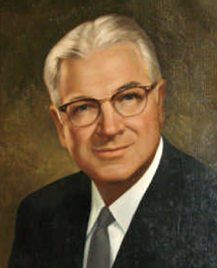 Max Holmes started his own insurance agency in 1932 at the height of the Great Depression. He had ten years of insurance experience and confidence in the future. He sold primarily life insurance and personal effects policies. The 30s were lean years, but he maintained the optimistic attitude that hard work and dedication would pay off. In fact, the Max L. Holmes agency soon emerged as one of the leaders in the sales of property and casualty insurance.

The agency grew and in 1948, Holmes hired a salesman who became the perfect teammate for him. Ray Murphy, Jr., would be the catalyst for the agency’s most productive era.

In the 1950s the agency became proficient in bonding and construction and the contracting department of the agency was developed. It was also during the 50s that the first association group plan evolved – a program of benefits for the Iowa State Bar Association. The success of the plan led to the development of the employee benefit department which is an integral part of the agency today.

Holmes, Murphy continued to grow in the 1960s and the agency became the first in Iowa to have salesmen traveling statewide on a regular basis. It was during this time that several of Des Moines’ largest employers placed their business with Holmes, Murphy and the agency became one of the largest in Iowa. New partners were added between 1962 and 1969 to assume management responsibilities that were increasing with the growth of the firm.

The 1970s brought about major growth both internally and structurally for Holmes, Murphy and in 1971 the firm incorporated under the name of Holmes, Murphy and Associates. Max Holmes was elected chairman of the board. He was semi-retired at this time but was always available to offer valuable advice and ideas concerning the operation of the firm.

Max Holmes died at the age of 78 in 1975, and two years later his partner, Ray Murphy, Jr., became ill and died. According to the company history, Holmes, Murphy and Associates, Inc. continues to carry out the philosophy that Max Holmes and Ray Murphy, Jr., developed. It “combines a commitment to excellence in service to our clients with dedication to our community.”