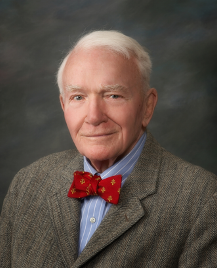 Luther L Hill, Jr., was born in Des Moines, and educated in the Des Moines Public Schools and graduated from Phillips Exeter Academy, Exeter, New Hampshire. He received a B.A. from Williams College and graduated with highest academic honors from Harvard law School in 1950. He served as a law clerk to the Honorable Hugo L. Black, justice of the U.S. Supreme Court.

In 1951 Luther returned to Des Moines and entered private practice. In 1952 he joined the legal staff of Equitable Life Insurance Company of Iowa. He ultimately became executive vice president, secretary and general counsel to Equitable Life Insurance Company of Iowa. He has served in other capacities with the Equitable Companies and served on its board until 1987. Upon retiring from Equitable, Luther returned to private practice where he continues of counsel to the Nyemaster Goode law firm in Des Moines.

Luther has served as the administrator of the Iowa Life and Health Insurance Guaranty Association since its inception in 1987. He has served the national organization by chairing five national task forces dealing with insurance company solvency matters.

Luther is an emeritus member of the Association of Life Insurance Counsel, was elected to the board of trustees of Simpson College in 1955 and continued in leadership there until 1998. He was elected an honorary trustee in 2005.

In the late 1970s and early 1980s, Luther and several other individuals formulated the skywalk concept for downtown Des Moines and coordinated the early stages of its development which cannot be paralleled by any other similar system in the United States.