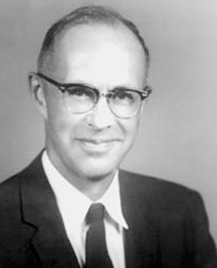 Lou began his 50-year insurance career in 1931, working at his fathers Cedar Rapids, IA, agency after graduation from Coe College. This was the beginning of a long and distinguished business, civic and military career.

He was the first individual in the state of Iowa to attain the CPCU, Chartered Property and Casualty Underwriter designation in 1949. He accepted a key leadership role in organizing the Iowa chapter of CPCU, serving as a charter member and first president. L. D. was dedicated to promoting public awareness of insurance issues, as well as encouraging the continuing education and professional development agents.

Other significant contributions include serving as past president of the Cedar Rapids Association of Insurance Agents, the chamber of commerce, Rotary and YMCA.

He was an accomplished musician with 57 years of service to the Cedar Rapids Symphony as a violinist.

Major General Burkhalter left the insurance industry from 1941–1946 to serve in the United States Army. After World War II, his service continued as division commander of the 103rd Infantry Division until retirement in 1966. In 1996 he was inducted into the Senior Army Reserve Commanders Association with 35 years of service in the Army Reserve.