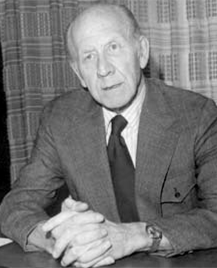 Lawrence G. Keeney earned his degree in architectural engineering in 1933 from Iowa State University. In 1935, he joined the engineering staff of Farmers Mutual Reinsurance Association, now Grinnell Mutual Reinsurance Company. In 1944, he was appointed chief executive officer. He served as president from 1951 until his retirement in 1974.

In 1962, under his direction, Grinnell Mutual established a research laboratory that tested farm equipment under controlled conditions to detect potential hazards to life or property. From the test results came recommendations to the manufacturers for product improvements.

He was recognized worldwide as a reinsurance professional. During his career, Lawrence Keeney wrote many articles for engineering journals and insurance publications. He was instrumental in persuading the state legislature to produce a new chapter of laws to govern county mutuals and revise the old laws governing statewide mutuals.