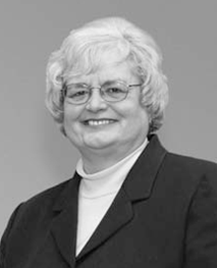 1971 was the beginning of an illustrious insurance career for Laura Sullivan. She had graduated from Cornell College and received her law degree from Drake University when she was approached by William Huff, Iowa commissioner of insurance from 1971–1976 about working for the department. Laura had concerns about working in the insurance industry. She had said on many occasions she thought that “insurance was boring,” and was unsure if there was any future working for the Iowa Insurance Department.

Laura became involved with NAIC and was instrumental in the design of some of the most far reaching consumer legislation and regulation ever developed by the NAIC, and still in effect today. These include a rewrite of the Unfair Trade Practices Law, model Unfair Claims Settlement Practices Law, and the first life insurance cost disclosure regulation. Laura rose to deputy commissioner in charge of the property and casualty division.

In 1975 Laura joined State Farm as a senior attorney, was elected corporate secretary in 1981, and vice president in 1988. She was the first woman to hold this position. Laura recently retired from State Farm with 29 years of service, and continues to serve on the State Farm board of directors.