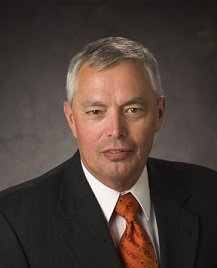 Larry Zimpleman retired from his distinguished 44-year career in the insurance and financial services industry in 2016. At the time of his retirement Larry was chairman and CEO of Principal Financial Group.

Larry grew up in Williamsburg, Iowa. His father was a rural mail carrier who also operated a small farm. Larry enjoyed mathematics in high school and was encouraged by a high school counselor to consider studying actuarial science. Discovering that Drake University offered such a degree, Larry also realized his father could not afford the required $2,000 annual tuition charged by Drake in those days. A solution was found when Larry was awarded a $1,000 scholarship from Principal and earned the other $1,000 working at a local McDonald’s.

In 1972, Larry began working part time at Principal while in college and joined the company full time after graduating from Drake in 1973. He rose quickly through the ranks, holding many positions of increasing responsibility in Principal’s pension division. In 1993, Larry was chosen to establish market research, strategy development and lead other efforts to capitalize on Principal’s small and medium business expertise.

In 2001 Larry was appointed executive vice president, leading Principal’s global expansion efforts and integrating the company’s U.S. and global asset retirement businesses. In 2006 Larry was named president and COO responsible for overseeing all global and domestic operations. In 2009 he was named chairman and CEO and successfully led Principal through the financial crisis. As the industry faced Dodd-Frank legislation and pressure from European, Chinese and other global regulators, Larry led the way working with others and speaking out about the negative or positive impacts to policyholders.

Larry’s leadership in the insurance and financial services industry extends beyond Principal. His skills and talents continue to be helpful to many industry organizations including The Financial Services Roundtable, The American Council of Life Insurers and The Academy of Actuaries.

Larry cares about Des Moines and it shows. In retirement he continues to serve the community with his time, talent and resources. Larry and his wife Kathleen (a Drake University 1976 liberal arts graduate) have been and continue to be active in supporting the following organizations: Drake University, Boy Scouts, The Principal Charity Classic, United Way, St. John the Apostle Church in Norwalk and Children and Families of Iowa.