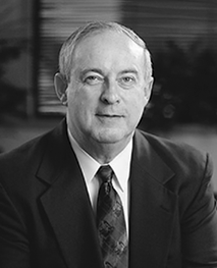 The ultimate mentor and friend, he listens, counsels and advises.

Larry graduated from Eastern Illinois, with at degree in education, majoring in business. His 38-year career in the insurance industry began as an internal auditor at State Farm, vice president of finance with Piedmont Management and controller at Frankenmuth Mutual Insurance Company.

In 1983 Larry accepted the challenge of leading NCMIC as the executive vice president. This small “B” rated company with five employees, offering a single product line and very little in reserves presented a unique opportunity for Larry. Leading by example, he was able to communicate his vision to others so that they were able to share the dream. Under Larry’s guidance, NCMIC was converted to the first non-life mutual holding company in Iowa. The transformation to a mutual holding company allowed for diversification and allowed creation of several subsidiaries.

Today NCMIC Group is a diversified insurance and financial services operation in all 50 states. NCMIC insurance Company is an “A” rated financially solid company insuring more than half of the Doctors of Chiropractic in the United States. These accomplishments are due largely to the vision and insight of Larry taking the necessary and sometimes difficult steps to grow the company.

Larry took his leadership position and the responsibilities that go with it very seriously. He was actively involved with the design of educational programs for graduating chiropractic professionals and encouraged staff development and further education.

Now we better understand why his staff told us, “He is my boss, my mentor, my teacher, my friend.”