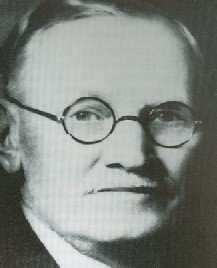 John Evans was born in 1865 in England. At the age of five he and his family immigrated to the United States, settling in Davenport, Iowa. In 1881, the family moved to Poweshiek County where he lived for the remainder of his life. He was a farmer and taught country school during the winter months. In 1905, he accepted a position as secretary/manager of Poweshiek Farmers Mutual Insurance Association where he was employed for the next 39 years.

In 1909, John Evans served as president of the Iowa Association of Mutual Insurance Associations. It was during his term of office, that a committee recommended forming an association to provide reinsurance to the county mutuals. On April 17, 1909, Iowa Farmers Mutual Insurance Association (now known as Grinnell Mutual Reinsurance Company) was incorporated. John Evans was one of the original board members, serving as a board member for the remainder of his life.

In 1934, John was named secretary/manager of Iowa Farmers Mutual Insurance Association and moved the company to Grinnell. Under his leadership the company achieved many accomplishments including introduction of a widely successful loss prevention program, co-op advertising, and a program for coverage of extended perils.

In 1929, he helped organize Allied Mutual Automobile Association and served as its first president. He served as a director of Allied from 1929 to 1944. His son and grandson later served as leaders of the company. John Evans was also president of Iowa Mutual Tornado Association.

John was very active in the Grinnell community. He helped found Grinnell State Bank in 1925 and served as its first president. He was the secretary of Farmers Elevator for many years and served on the Grinnell city council.

John Evans passed away on March 25, 1944, and is buried at Hazelwood Cemetery in Grinnell.