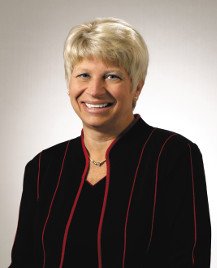 JoAnn Rumelhart broke ground as a female actuary and senior officer in the life insurance field in Des Moines. She was awarded ever increasing responsibility for Farm Bureau Life Insurance Company and its subsidiaries and affiliates throughout her career.

She graduated with a Bachelor of Science degree in mathematics from Iowa State University and completed graduate work at Drake University in actuarial science and statistics in the 1970s when there were very few women in the actuarial field. She began as an actuarial staff assistant at Farm Bureau Life in the fall of 1978 and retired as executive vice president in 2008 after serving in that capacity for eight years.

Her rise in the company came quickly. She was promoted to actuarial vice president in 1985 and again to vice president – client services in 1991, with responsibility for both life and Farm Bureau’s property casualty policy service areas. In 1992 she joined the FBL Financial Group Insurance management team as the only woman in senior management.

During her tenure she presided over numerous mergers and acquisitions, necessitating the coordination of the processes of four independent actuarial, sales and marketing, operations, processing, legal and other functions of those business units. After Farm Bureau Life went public in 1996, JoAnn played a prominent role in communications and interaction with the company’s shareholders and investment analysts. She was a regular spokesperson for FBL on earnings conference calls and at investor and industry conferences. She also served on FBL’s investment committee, which established the framework for FBL’s multibillion dollar investment portfolio.

She also played a key role in the creation of FBL’s subsidiary, EquiTrust Life Insurance Company, which quickly grew to more than $7 Billion in net assets as the eighth largest writer of indexed annuity products in the U.S. in a few short years.

Her own dedication and success served as a model for the careers of many younger women at Farm Bureau and in other companies in the insurance business. An active member of the Des Moines (now Iowa) Actuaries, she served as president, VP, secretary and treasurer at various times. She was a willing mentor to many young women and an inspiration to many others.

JoAnn also showed her concern for others through her service on the board of directors for Beacon of Life Residential Center for Women, supporting both the women clients and as a mentor to its director for several years. She also served on the Make-A-Wish Foundation board and encouraged FBL and other organizations to provide financial support. In addition, she served on LIMRA’s Executive Development Committee Taskforce and as a member of the Dean’s Advisory Council for ISU’s College of Liberal Arts and Sciences.