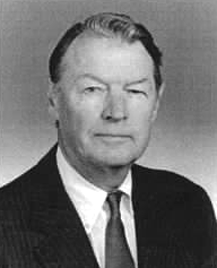 As the great-grandson of a founder of Equitable Life Insurance Company of Iowa, James W. Hubbell, Jr., began his insurance career in 1946 as a clerk in the city loan section of the company. Three years later, he was named loan supervisor; in 1953, assistant treasurer; and in 1957, assistant financial vice pPresident. Jim was named treasurer and elected to the board of trustees in 1961. The following year he advanced to investment vice president. In 1964, he transferred to the agency department and was named marketing vice president. Jim was elected vice president of the company in 1971 and named chairman of the board in 1976, a position he continued until his retirement in 1993.

As a visionary, James Hubbell, Jr. was instrumental in moving Equitable Life Insurance Company of Iowa from a family-owned, mid-sized life insurance company to one of the largest players in the annuity market. Due to his foresight and knowledge while serving as chairman of the Equitable of Iowa board, the company is now part of one of the largest financial service businesses in the world.

His ongoing support and service to the city of Des Moines have been of immense benefit to the community. Jim has served as a board member and chairman of the United Way annual fund drive, and as a board member and president of the chamber of commerce. His vision and guidance as co-chairman of the 1972 city bond issue to build a new hotel, performing arts theater, public plaza, and parking led to the creation of the Des Moines Civic Center and Nollen Plaza. Jim currently devotes his time, energy and talent as a trustee for Simpson College, the Des Moines Community Foundation, Lutheran Social Services and the Smoother Sailing Foundation.