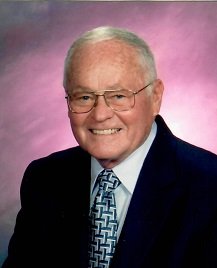 It was inspiring that letters supporting Jim Luhrs for consideration for induction into the Iowa Insurance Hall of Fame were sent by a variety of people from every walk of life who were touched in one way or another by Jim’s encouragement, generosity, his insurance skills and/or his friendship. Jim was born in Primghar, Iowa. Following high school graduation, Jim worked for two years as a railroad telegraph operator. He then served in the U.S. Army from 1953 through 1955. Following his return from service, Jim returned to his railroad position while at the same time enrolling as a student at the University of Northern Iowa. He graduated from UNI in 1959 with a major in business and distributive education and a minor in economics. Jim earned his Chartered Life Underwriter (CLU) in 1963.

In 1958, Jim married Patricia Ann Goebel and their marriage was blessed with two sons, Brad and Mike, and later, grandchildren.

Jim’s 39-year career with The Equitable of Iowa got an early start when he became a life insurance agent with the company on July 1, 1956 while he was a college sophomore. After several years of sales success, Jim began a career building multiple agencies with his management skills.

In the years between his 1956 start with Equitable of Iowa and his 1995 retirement as chairman of the board, Jim’s career was a steady progression of increased responsibilities and numerous accomplishments. Despite industry changes in the agency system towards the end of Jim’s career, many nominating letters were complimentary of how Jim was able to lift many others to continued success within the company.

Insurance industry groups benefited from Jim’s leadership, too. The following three organizations received helpful and ongoing support from him during his career: CLU chapters, GAMA groups and life underwriter associations.