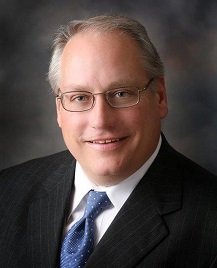 Jamie Krist was born in West Des Moines in 1959, and other than for his undergraduate education at his beloved University of Iowa, he lived a full life of service in the Des Moines area. After graduating from Valley High School, he obtained a business degree in financial economics from Iowa and later an MBA from Drake. He died on April 7, 2015 at the age of 56.

His insurance career was centered around Krist Insurance, a multiline independent agency in West Des Moines that included his family members and others he challenged and inspired. He was known for his leadership, technical knowledge, exceptional business mind and tenacity, and used them to create the highly successful agency that bears his name.

Krist successfully represented many of the top Iowa and national carriers. He was also a lifetime student and a teacher of insurance and its many facets. He was well versed in both the life and property casualty fields. He was a board member and chair of several committees of the Big I in Iowa, and the chair or board member of the advisory committees of several of the insurance companies he represented, including Safeco, Travelers, Harleysville and Selective. He also served three terms as chair of the National Technical Affairs Committee of the National Big I. He was also a frequent speaker for Drake University, the Small Business Administration, Upper Iowa U, the Independent Insurance Agents of Iowa and other groups.

Not content with just a successful insurance career, Jamie Krist was equally committed to his community. He was active on the boards of the Iowa Heart Association, Animal Rescue League and the Des Moines Mid City Vision Coalition. He gave of his time freely to Junior Achievement. He was also an active member of the Des Moines Rotary Club, the Moingona Masonic Lodge and the Za-Ga-Zig Shrine. He also found time to serve on the board of the Moingona Girl Scouts.

Jamie also shared that enthusiasm for his community and profession with his family, and he both involved them in the business and loved the time he spent with them out of the office. He was an enthusiastic skier, golfer, fisherman and Hawkeye sports fan. He knew how to commit himself fully to whatever he endeavored.