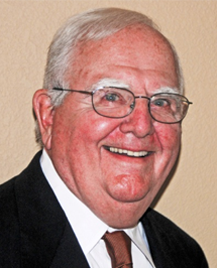 After serving in the U.S. Navy and graduating from Drake University, Kirkpatrick began his career with Allied in 1949 in the underwriting department of the company where he continually was promoted, first to field supervisor for the agency department, assistant underwriting manager, and resident vice present and manager of the newly-created Des Moines regional office in 1969. He remained in that position for 20 years. The Des Moines regional office serviced Iowa, Missouri and Minnesota independent agents writing Allied products. It was the largest of Allied’s four regional offices at the time.

During his tenure as manager of the Des Moines regional office, its territory grew to eight states and annual premiums increased to nearly $300 million from less than $50 million. In 1989, Kirkpatrick celebrated his 40th anniversary with Allied and was elected to the board of directors. He was elected executive vice president in 1990, president in 1992 and served as CEO until his retirement in 1993.

Kirkpatrick was known for serving his community through service on various boards and his commitment to the Iowa insurance industry. Many insurance professionals remark about Kirkpatrick’s interest in young people in the business and his continued nurturing of new employees and promising future industry leaders. Several of the people he hired, trained and mentored are in executive positions in Allied and Nationwide today.

His tireless advocacy for the insurance industry and those in need throughout the communities of Iowa has helped make Jim Kirkpatrick an example for all.