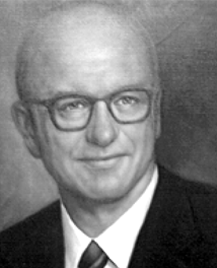 Ray received his B.S. in business administration from the University of Iowa in 1941. He started his career with the Fidelity and Casualty Companies in New York City, working in their branches in Albany, Syracuse and Minneapolis (taking time out for World War II). Ray joined the Holmes Murphy agency in 1948, becoming a partner in 1950. In addition to achieving the CPCU designation, he served on numerous community activities including co-chairman of the United Campaign, president of the Des Moines Chamber of Commerce, president of the Wakonda Club, and the board of directors of the YMCA. He was a member of the board of directors of the University of Iowa Alumni Association and served for many years on the Drake University board. He also served on the board of directors of the Central National Bank and Trust Company.

Ray played football with the University of Iowa 1939 Ironmen. It was his success on the football field that could be used to predict his great success in the insurance industry. He was known as a great developer and leader in the insurance business and made many contributions to his community and state. He was known to be fiercely competitive and always fair.