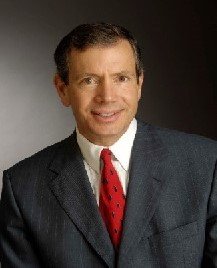 In 1973, Doug graduated from Roosevelt High School in Des Moines. He attended Drake University and served as an intern at Holmes Murphy while at Drake. Upon graduation, Doug joined Holmes Murphy as an account executive with a focus on personal lines and small business insurance, and later moved into the commercial property and casualty area. By 1984, Doug became a shareholder in the company and was elected to the board of directors of HMA, Inc.

Doug advanced rapidly to sales manager of the property and casualty division, president of Holmes Murphy-Iowa, and in 1993 he was named chairman and chief executive officer. He recognized that business is all about sales and service, helping people to achieve their own aspirations while protecting their personal and professional assets, but it is also about people’s lives. Doug’s leadership focused on providing vision to associates and clients to face challenges and succeed. The mentoring programs and year-long leadership program helped develop tomorrow’s leaders. Doug instituted leading edge Wellness in the Workplace programs for HMA and their business clients.

Doug retired in 2007 to devote his tireless energy to the betterment of Iowa. Firmly committed to improving the world around him, Doug lives in the central city neighborhood where his three children grew up. His leadership role in over a dozen community organizations has been very influential. His long term commitment to the United Way of Central Iowa includes an initiative called Emerging Leaders, designed to enable more young leaders to develop to lead the next generation. He has or is a leader in Light up Iowa, the Iowa Games, Prevent Blindness Iowa, YMCA, Greater Des Moines Community Development, Wellness Council of Iowa, Greater Des Moines Partnership, Greater Des Moines Convention and Visitors Bureau, Des Moines Water Works and March of Dimes.

Doug speaks out on issues of concern that impact the next generation through seminars, at social venues, in interviews with the media and by his example. He openly supports those running for office that he believes will benefit the economic environment as well as the social issues that affect quality of life for citizens of Greater Des Moines and Iowa.