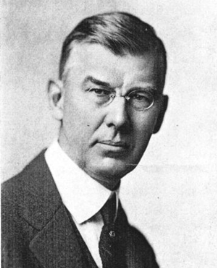 Like his younger brother, Henry Nollen was also educated by family in a privately-owned school. Henry also inherited his father’s strong mathematical abilities, so much so that by the age of 12 he was working as a bookkeeper in his father’s bank. In 1885, Henry graduated from Pella’s Central College at age 19 and stayed on for two years as a faculty member teaching mathematics.

Several Des Moines businesses were blessed by his work ethic in the years following his departure from Pella. But his true love was insurance and that resulted in his eventual hiring at Banker’s Life as its first actuary in 1893. Henry made a major contribution to the future Principal Financial Group by making the recommendation and supporting it statistically to convince the company’s board of directors to convert from the association model to a mutual insurance company. This action impressed FH and FC Hubbell. When Henry lost a management battle at Banker’s Life he accepted their offer to put him on the board of Equitable of Iowa and make him a vice president and general manager. He worked for Equitable for a quarter of a century, serving as president of the company from 1921 to 1939. While serving as president, Henry built the Equitable Building at Locust and Sixth in downtown Des Moines. Ultimately he was to be the victim of his own success, the new pension plan for home office personnel which set a mandatory retirement age of 65. He was 72 when he stepped down.

Henry served on numerous committees within the insurance business and on city boards. He was an executive committee member of the Association of Life Insurance Presidents and was elected that group’s chairman in 1935. He was a trustee for the Des Moines Water Works, from 1919 to 1942. He was very active in the Masonic fraternity where he was made a 33rd degree Mason. Keeping the family bank in check was his life-long love and at his death he was still president of the Pella State Bank.