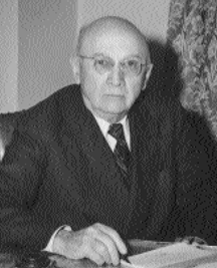 H.F. Gross was a pioneer in the mutual insurance world and in Iowa. From a country boyhood in Webster County, Iowa, without the advantage of great wealth or position, he began his professional career with the Iowa Mutual Tornado Insurance Association at age 19 as a policy writer, clerk and assistant to the founder. After a brief service to the community as city treasurer of Des Moines, Mr. Gross carefully plotted his life’s plan, returned to the Tornado Association in 1905, earned several promotions, and was named chairman of the board in 1945. Under his leadership, the Iowa Mutual Tornado Insurance Association, now known as IMT Insurance Company, became the largest assessment windstorm insurer in the nation.

Recognized as one of the pillars of mutual insurance in the United States, Mr. Gross served as a director in the National Life Company, National Travelers Casualty (Mutual), Town Mutual Dwelling Insurance Company, Central National Bank and Trust Company and a director and organizer of the Allied Mutual Casualty Company. In addition, he is a past president of the National Association of Mutuals and the Iowa Association of Mutuals.