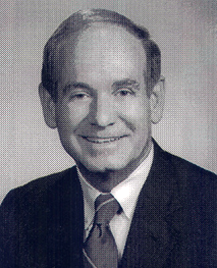 Few names in Iowa history are as instantly recognizable as the one belonging to Robert D. Ray. The 14-year governor of Iowa, Ray served as chairman of the National Governors’ Association, the Republican Governors’ Association, the Midwest Governors’ Conference, the Education Commission of the States and the Council of State Governments. In 1983, Ray became president and chief executive officer of Life Investors, Inc., now known as AEGON, and led the company to record-breaking success. In 1989, he was named president of chief executive officer of IASD Health Service Corporation, where he united Blue Cross of Iowa, Blue Shield of Iowa and Blue Cross of Western Iowa and South Dakota into a single corporation, again breaking all company records for revenue, income and assets.

Ray has received 16 honorary degrees, and his involvement in, and recognition for, civic and charitable activities are too numerous to mention. Even after his retirement in 1997, Ray continued to serve Des Moines as interim mayor and president of Drake University. Making Iowa the insurance capitol of the world has long been one of Robert D. Ray’s goals, and his countless contributions to the industry, to Iowa and to our nation are legendary in scope and impact.