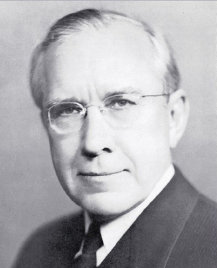 Gerard Nollen was born in Pella, Iowa, and was educated in a family owned private school in Des Moines. His mathematical training from his teacher and father was made practical when he went to work at $1.00 per week in the bank where his father was cashier. He enrolled in Grinnell College and graduated in 1902 with a degree in philosophy.

He spent his first six months after graduation as a clerk for the Banker’s Life. He worked at Royal Union Mutual until 1904 and then became an actuary at Equitable of Iowa, where he worked for six years. He re-joined the Banker’s Life in 1912, was elected to the board of directors and became company secretary in 1913, was elected vice president in 1919, and was elected the fourth president of Banker’s Life in 1926. During his “walk up” to the presidency, Gerard developed policies that were novel and attractive to the public. He supported development of the role of today’s insurance agent, knowing that strong distribution channels were a key to growth. He shored up the financial position of the company, led it through the Great Depression and built the company’s first home office.

Gerard retired as CEO in 1946 and became the Banker’s Life first chairman of the board, serving until 1951. He remained on the board of directors until 1957.

Gerard was a pioneer in our industry’s involvement in the community. He was founder and original member of the Community Chest Board, served on the board of the Chamber of Commerce and served as president of the Des Moines Club. Outside of the industry itself, Gerard was active as a Grinnell College trustee and on the board of the Boy Scouts of America.