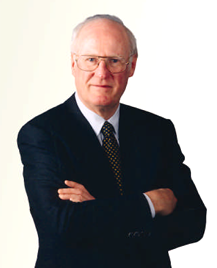 Gary Kirke grew up in Des Moines, Iowa, and was the youngest of eight children and attended St. Augustin Catholic School. He graduated from Roosevelt High School in 1961.

Gary joined the Illinois National Guard and graduated from DePaul University in Chicago with a bachelor’s degree in commerce. He chose a career in insurance, following in the footsteps of his father and brother. He started as a management trainee at CNA’s Continental Assurance Group in Chicago.

While on a business trip to Washington, D.C., Gary ran into his former high school classmate Bill Van Orsdel. Gary shared his thoughts about the future direction of the insurance industry. He believed that entrepreneurs could not only sell insurance through large associations, but harness the power of thousands of participants to custom design appealing insurance programs with progressive underwriters. Thus, Kirke-Van Orsdel Inc. (KVI) was born. They could have opened their new business anywhere. But these Iowa natives chose Des Moines. It wasn’t just that they viewed Des Moines as home; they also recognized the city’s many advantages.

The two upstarts didn’t have much in the way of capital, but they managed to start a two-man operation. They couldn’t afford rent, so they moved into a tiny office offered to them by Gary’s brother. Gary and Bill weren’t in the rent-free space for long. The company landed the 128,000-member Reserve Officers Association in 1976—a big win by any standards, huge for a new company the size of KVI.

In 1978 the momentum surged when KVI landed the National Rifle Association followed by The Retired Officers Association. When plans to build Capital Square were announced in 1983, KVI became the anchor tenant.

The next year, KVI forged a joint venture with the renowned Johnson & Higgins, the largest privately-held insurance brokerage firm in the world. J&H/KVI developed an innovative group universal life product for IBM. The computer giant became the joint venture’s breakthrough client after KVI generated an 80% participation rate among the company’s 220,000 employees. Soon, the joint venture counted 350 of the Fortune 1000 among its clients for group universal life insurance.

After the sale of KVI, Gary and Bill both continued to live, work and invest in Des Moines and in Iowa. While Gary and Bill remain partners in key ventures—such as West Glen, a $120-million urban village, each has pursued his own interests in business and community involvement. Gary started Kirke Financial Services in 1999 and has invested in a number of Iowa-based companies. He along with Michael Richards acquired MED-TEC, an Orange City-based designer and manufacturer of the patient fixation and tumor targeting software and accessories used in radiation treatment. In late 2005 after MEDTEC was sold to Roper Industries, Kirke kept Tec Industries as a separate business.

Gary also created a new Iowa gaming company in 2005, Wild Rose Entertainment, which owns casinos in Clinton and Emmetsburg. In addition, he formed a private equity company that invests in technology and energy companies among others.