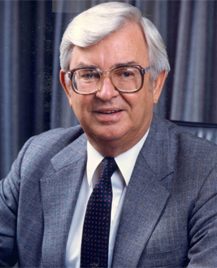 In 1991, George Kochheiser retired as the fifth president, director and chief operating officer of Employers Mutual Companies. He graduated from Drake University in 1949 with high honors and was elected to Phi Beta Kappa.

Before graduating from Drake, Mr. Kochheiser served with the U.S. Armed Forces in World War II and received the Purple Heart for his efforts. Interestingly, he also received the Bronze Star for meritorious service in combat but it wasn’t presented until forty years later.

Shortly after graduating from Drake, he began his working career at Employers Mutual with his first position in the accident prevention department. That, combined with a one-year training position as safety engineer in Chicago, provided him the opportunity to see an array of different types of businesses and risks and gave him a strong foundation in what the company would insure. He then began servicing EMC’s branches which helped him to become acquainted with the value of broad-gauged branches and he became a strong advocate for the independent agency system. He then took on the task of forming a new marketing department at the home office and re-tooled the department to develop programs to meet local needs in each expanding field office. He introduced branches to the idea of becoming a central operation for underwriting as well as claims This allowed the home office to focus on company-wide planning and to approach its new role as a national firm and to plan for the future separately from operations. His success was based on his promotion of the independent agencies and his advocacy for continued learning. His charismatic personality and his keen sense of the big picture made him a perfect role model for others in the industry. He was named president and COO in 1982 and served until he stepped down in 1991. He was a member of the board of directors from 1974 until 2008.

Mr. Kochheiser received his CPCU designation in 1959 and served as president of the chapter in 1972-73. He traveled around the country promoting CPCU and American Management Association programs to encourage insurance professionals to learn the best business practices. In 1977 he became president of the National Conference of Casualty Insurance Companies, an education organization for stock and mutual companies.

George was active in the community. He served on the board of directors of Brenton Bank and was a member of the Des Moines Chamber/Partnership and Rotary Club. He and his wife currently live in Cincinnati, OH.