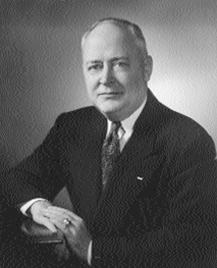 A native of Des Moines, George H. Olmsted graduated from the United States Military Academy in 1922 and returned to his hometown to open an insurance agency with his father shortly thereafter. Just six years later, at the age of 27, Mr. Olmsted purchased the first of 11 insurance companies on his way to building a most impressive insurance company family. In addition, he orchestrated the successful merger of two acquisitions to form the Hawkeye-Security Insurance Company, one of the first multiple-line insurance companies in the United States.

Ultimately, Mr. Olmsted became president and chairman of the multi-faceted International Bank of Washington, D.C., whose activities spanned the globe in the fields of international banking, property and casualty insurance, life insurance, industrial activities and financing and leasing operations.

Mr. Olmsted was called to active duty in 1941 and served in the Pentagon until he was named assistant to the China Theatre Commander, General Douglas MacArthur. He is credited with the release and rescue of 35,000 soldiers and civilians from Japanese prison camps in 1945, and was awarded the Distinguished Service Medal later that year. During the Korean War, Mr. Olmsted served as director of military assistance and retired in 1953 as a two-star major general in the Army Reserves.