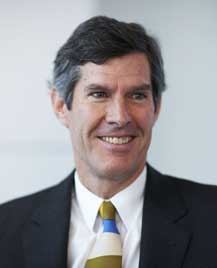 Mr. Hubbell has had a wide ranging career as an attorney, chairman of a retail department store business and CEO and chairman of a large and successful life insurance company which was sold to one of the largest financial institutions in the world. Mr. Hubbell subsequently rose to a most senior level of this global institution, moving to Europe and becoming a member of the executive board where he shared global responsibilities for the insurance and asset management businesses.

Mr. Hubbell began his career as an attorney in New York City, specializing in corporate trust, finance and securities work. In 1981, Mr. Hubbell and his wife Charlotte moved to Iowa. He became a partner in Mumford, Schrage, Merriman and Zurek, the outside law firm for Equitable of Iowa. In 1985, Mr. Hubbell became chairman of Younkers, a retail department store business owned by Equitable with over 5,000 employees. In 1987, Mr. Hubbell became president of Equitable of Iowa while retaining the chairmanship of Younkers. While at Equitable, Mr. Hubbell was responsible for day-to-day operations as well as several strategic initiatives for the company. He helped start a de novo annuity business for Equitable, sold off several businesses, grew major businesses and ultimately led the negotiations for the sale of the company to ING for over $2B in 1997.

Mr. Hubbell then joined ING as president and CEO of the U.S. retail financial services business. In 1999, Mr. Hubbell’s increasing responsibilities took him and his family to ING’s global headquarters in Holland. In 2000, Mr. Hubbell joined the executive board of ING Group. This board consisted of the 5-7 most senior executives of the company and was responsible for all lines of business and global oversight of all employees and all profits. In this role, Mr. Hubbell’s direct responsibilities were in the insurance and asset management areas where the business grew through internal growth and the strategic acquisition of several key businesses in the US market such as Aetna Financial Services and ReliaStar Corporation. In mid-2006, Mr. Hubbell retired from ING and he and his family returned to the United States.

Between 2007 and 2010, Mr. Hubbell worked in two different capacities for Iowa state government.

In 2016 and 2017, Mr. Hubbell served as chair of the board of directors of the Community Foundation of Greater Des Moines.

Mr. Hubbell and his wife Charlotte have three adult children and four grandchildren. In his spare time he enjoys biking, skiing and golf.