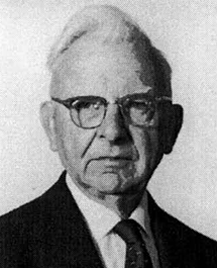 Modern scholars claim that the key to success in business is creating a vision and working as if that vision is a reality. This simple formula was the guiding principle behind the success of Elmer Warner in creating Merchants Bonding Company. Elmer was born in 1885 in a small village in Vermont. He attended Oberlin University in Ohio and met his future wife there. After leaving college in 1910, they married and moved to Mason City, Iowa. For the next decade, he was a field representative for the Fireman’s Fund.

He next joined Union Indemnity Insurance Company of New Orleans where he learned the surety bond business. When that company dissolved in 1932, the Warner family moved to Des Moines. While working for a Des Moines insurance agency, Elmer developed the vision of creating a mutual bonding company. The first annual statement of Merchants Mutual Bonding Company showed a surplus of $791.01. This rather small amount created some concern with the Iowa insurance commissioner. Consequently, Merchants was temporarily limited to writing only a few types of bonds.

Although the early years were difficult, Elmer persevered with a disciplined underwriting approach that is still utilized in the organization. Merchants Bonding Company (Mutual) is the largest surety writer in Iowa today and ranks 23rd nationally. Elmer’s vision is still very much alive.