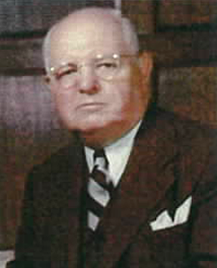 Edwin H. “Hub” Mulock began his insurance career in Des Moines with Fidelity and Casualty Company in 1907. He spent the next several years working as both an insurance company staff member and an independent agent. In 1916, he became a partner in the insurance agency of Wilcox, Howell, Hopkins and Mulock (now LaMair-Mulock-Condon Co.), an association that he maintained until 1938 when he was named president of Central Life Assurance of Des Moines. In 1949, Mr. Mulock was named chairman of the board. Four years later, he resigned from that office, but continued to serve as a director until the close of his life.

Hub Mulock pursued interests in addition to the insurance industry. He served the city of Des Moines as mayor from 1928-1930. Two significant accomplishments during his tenure were adjusting property assessments and refunding $514,000 in deficient public improvement bonds.

From 1933 to 1935, Mr. Mulock was appointed by the governor to serve as head of the Iowa Emergency Relief Administration. His responsibilities included distribution of over $46 million in state and federal relief funds to needy areas during the Great Depression.

A leader in civic affairs and an organizer of the Community Chest Plan in Des Moines, Hub Mulock actively worked to make his community a better place to live. He served on the board of directors of Northwestern Bell Telephone Company, the Des Moines Transit Company, Iowa Power and Light Company and the Iowa Des Moines National Bank. Hub served as president of the Des Moines Chamber of Commerce, the Greater Des Moines Committee and the United Campaign.