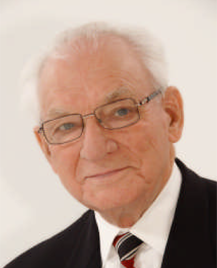 Cleo Edwards is proud to be a life insurance salesman. He is passionate about helping individuals and businesses fulfill their goals and provide for life’s contingencies. Mr. Edwards has been using the power of life insurance one person and one business at a time over the past 58 years to make an impact on lives. Mr. Edwards has had the opportunity to work with thousands of individuals who wanted to provide security for their families, themselves and their businesses. He continues to work in his chosen profession full time.

He grew up in Missouri, the oldest of nine children. He was sixteen when his father died. There was no life insurance or social security to help the family. He was put into the Civilian Conservation Corps (CCC) by his grandfather and uncle, even though he was under the required age. He ended up driving a dump truck at Mt. Rainier National Park in Washington. Of his $30 monthly pay, $25 went to his mother. He didn’t graduate from high school. Some of his siblings went to live with relatives.

After getting out of the CCC, he ended up in Geneseo, Illinois, looking for work as a hired hand. He left home with a tin suitcase with baling wire for a handle. This suitcase became a prop in many speeches over the years including on the main platform at the Million Dollar Round Table’s bicentennial meeting in Boston. He eventually decided he would go back to Washington and be a park ranger. On his way there, he stopped in Cedar Rapids to visit an aunt. Circumstances resulted in him staying in Cedar Rapids, working at the packing house and meeting his wife.

After serving at Placentia Bay during World War II, he returned to Cedar Rapids and the packing house. However, he took the required tests and was admitted to the University of Iowa on the GI Bill. He continued to work full time while attending college, but left the packing house for Barkers Shoe Store. He was working as a management trainee in the yard goods department at J. C. Penney when Francis Merritt, who was vice president of agencies at Central Life came into the store. He asked Mr. Edwards how he liked his job. “Not a damn bit,” he replied, as he’d recently been told he had to stay late and sweep the floors instead of being in a fraternity brother’s wedding. This conversation soon led to his entry into the life insurance business with Central Life Assurance Company on July 1, 1950 with a $100/month draw. With the early guidance of both Francis Merritt and Hub Mulock, who was then president of the company, he learned the life insurance business. His education continued both through Central Life and his own studies. He earned his CLU and ChFC designations from The American College.

Because he’d learned so much from so many, Mr. Edwards wanted to give back. He served in many capacities for local, state and national insurance organizations. This included serving on the board of AALU and the Million Dollar Round Table’s Top of the Table, serving as a two-time trustee on what is now NAIFA, and in all offices of the local and state life underwriters associations, estate planning council and CLU chapter. He received the Iowa Life Underwriters Association’s Newell C. Day Man of the Year Award in 1966 as well as its Unsung Hero Award in 2003 for which he had been nominated by a client.

For the past 55 years, Cleo has qualified for the MDRT every year and leads that organization with continuous qualifying membership. The MDRT has over 39,000 members in 80 countries around the world. Truly the top of the top.

He also wanted to give back to the Cedar Rapids community which had been so good to him. He has served on many boards including chairing the local United Way to its first $1,000,000 campaign, and was instrumental in the organization of the First National Bank in Marion which is now part of Wells Fargo. He has been involved in the Boy Scouts, Junior Achievement, his church, as well as the St. Luke’s Hospital Foundation and Iowa Student Aid Commission. He is currently active in the preservation of the Ronald Reagan Ranch and a member of its Rawhide Circle.

Central Life has gone through several name changes and is now Aviva. Mr. Edwards is proud and honored to join the Iowa Insurance Hall of Fame which has already honored two former presidents of Central Life, Hub Mulock and Roger Brooks.

Marsha Nevius has been Cleo’s administrative assistant for the past 33 years, as of last week. Cleo has been married for 65 years to his wonderful wife Charlotte, and they have two children and four grandchildren of whom he is very proud.