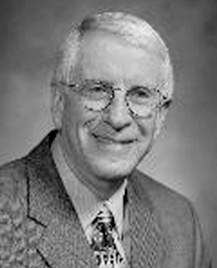 Clarence was born and raised on a Hereford farm in Leola, South Dakota. He graduated from South Dakota State University, then accepted a position teaching high school economics and vocational agriculture in Correctionville, Iowa. In his third and final year of teaching, he received the Iowa Broadcasters’ Teacher of the Year Award.

Clarence began his insurance career with State Farm, and then joined the ranks of the independent insurance agents. The Hoffman Agency today has 12 locations in western Iowa and over 50 employees. He is a past president of the Independent Insurance Agents of Iowa and was named Agent of the Year by IIAI in 1978.

Clarence is completing his third term in the Iowa House of Representatives where he chaired the Committee for the Iowa Values Program in 2003. Currently chairman of the Committee on Economic Growth, he has managed a number of bills designed to promote economic growth in Iowa, including the One Cent Local Option Sales Tax, the new Capital Investment program, and enterprise zone credits to help retain employers in Iowa. He also takes particular pride in having managed the Safe Haven legislation to support young, inexperienced women who are not prepared or able to adequately care for a child.

As a result of his work as chairman of the Committee on Economic Growth, he has been asked to be a member of the Iowa Department of Economic Development board, the Iowa Values board and the Advisory Board of Iowa Small Business Centers.