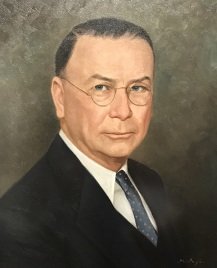 Albert Falkenhainer was a visionary and a builder. He was born in Guttenberg, IA, in 1875. He whizzed through schooling and a pharmacy apprenticeship, then purchased and operated a pharmacy with a partner in Algona in 1895. In 1898 his pharmacy was the first building and business in Titonka. He also organized the town government, built its first telephone exchange and organized its first bank and served as president.

In 1902 a fire destroyed his Titonka drug store. Frustrated by the loss settlement and high premiums, he looked for a better way to insure pharmacies. He was active in the Iowa Pharmaceutical Assn and was its secretary for 14 years. During that time he chafed at the high rates insurance companies charged pharmacists, believing their “dangerous chemicals” required higher rates than other retailers. Albert knew he could do better.

In 1908 Falkenhainer led a group of pharmacists to form a mutual druggist insurance company. In 1909 the first policies were issued through another company, with the idea that their own company would issue the policies when sufficient size was achieved. That happened in October of 1909. Using efficient methods, fair practices and fire prevention training, the company was able to operate profitably and return dividends up to 40% by 1920.

The company rapidly added liability and other coverages for druggists in Iowa, then in surrounding states as well. Growth continued, and the company sells nearly nationwide today. The name was changed to Pharmacists Mutual in 1991.

Falkenhainer’s talent for organization stretched far beyond his profession and his company. He founded and was first president of the Northwestern Pharmaceutical Society. In l918, after he volunteered and was rejected for the Army at age 43, he became chair of the Red Cross, the Military Training Camps, the Committee of Patriotic Meetings and the War Fund Campaign for Kossuth County. After the war, he led the county campaign for paved roads. In his spare time he organized and was the first president of both the Algona Country Club and Algona Rotary Club and went on to be a national officer of Rotary. His civic involvement was always done quietly, with no desire for reward other than the betterment of his wide community of interests.

Falkenhainer was also a devoted family man. He left a great legacy on his community, his family, and his profession, as well as the company he founded. And he managed it all in 57 years, passing away of a heart attack in 1932.