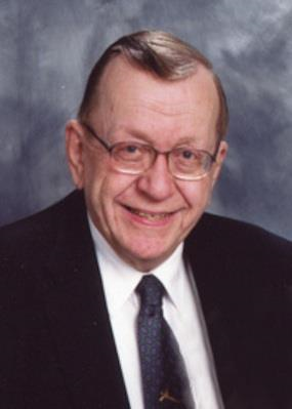 Ted was born October 14, 1937 in Des Moines, Iowa to Henry J. Lussem and Gertrude (Bychowski) Lussem. With the exception of a six year period in the 1960s when he lived in Springfield, IL and Grand Rapids, MI, Ted was a lifelong resident of the Des Moines area. He grew up on the east side and was a graduate of East High School.

For more than 60 years Ted worked in the insurance business starting with Crum & Forester Group in 1955, then Hawkeye-Security Insurance in 1957, then finally what was to become Brooks-Lussem Insurance, Inc. in 1968.

His civic involvement included: Trustee and past Chairman, Broadlawns Medical Center; Citizen Member, City of Des Moines Police and Fire Pension Board; Member, City of Des Moines Riverfront Improvement Commission; Charter Member, Pioneer Sons and Daughters Genealogical Society and their treasurer; Charter Member and treasurer, Des Moines Historical Society; and Board Member, Iowa Genealogical Society. He had been the President of the East Des Moines Club and he was the recipient of the 1994 Better Business Bureau’s Excellence Award. He also served over ten years on the Lutheran Hospital Patients Advisory Committee.

In the insurance industry, Ted was a Chartered Property Casualty Underwriter (CPCU). He had been President of the Independent Insurance Agents of Des Moines twice and was their Education Chairman and their treasurer for many years. Ted was also a member and past president of the Iowa Chapter of CPCU and their historian. He was also a member of the Insurance Association of Greater Des Moines and had received their CPIM designation in 2005. In addition he taught insurance classes at both Drake University and DMACC for several insurance organizations. In 1993, he was the author of a historical monograph titled “The Independent Insurance Agent in Des Moines” and in 2006 authored the 100th Anniversary Book on the Independent Insurance Agents of Iowa. Ted was treasurer of the Fire Mark Circle of the Americas and treasurer of the Iowa Insurance Hall of Fame organization.

Ted is survived by his wife of 63 years, Sherrie C. Lussem, and his niece and nephews. He was preceded in death by his parents, Henry J. and Gertrude Lussem, his sister Therese in 1954, and his brother Henry Jr. in 2010. In lieu of flowers, donations may be made to the Iowa Genealogical Society Building Fund at 628 E Grand, Des Moines, IA 50309.