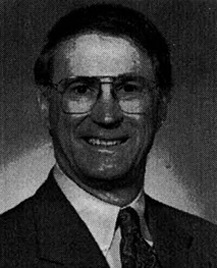 In 1966, Tom Gibson graduated with a degree in actuarial sciences in 1966 from Drake University. Hired that same year as an actuary at Farm Bureau Financial Services, Tom was identified for his leadership abilities and rose through the ranks of management until he was named CEO, a position he held from 1996 until his retirement, March 1, 2000. Much of the growth that Farm Bureau has experienced in the past five years can be attributed to Tom. In addition, FBL Financial Services went public, several alliances with a number of other companies were negotiated, two life company mergers were completed, and two P&C company consolidations were negotiated.

Tom can be described as a most humble individual. He is one man in an army of many but he is the leader and everybody knows it and all are proud to serve under his leadership.

Tom has helped to improve the quality of life for children and families in the Greater Des Moines community through his leadership positions in many organizations, such as trustee of the West Des Moines Police and Fire Retirement System, board of directors of Ballet of Iowa, vice chairman and chairman of the Greater Des Moines Chamber of Commerce Federation, campaign chairman of the United Way of Central Iowa, trustee for Grand View College, and director for Access Air Holdings, Inc. He has also been the recipient of several community awards.