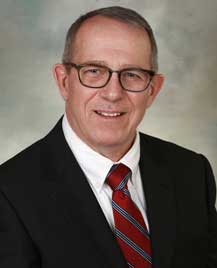 Tom is an Iowa native. He was born in Des Moines and attended the Des Moines public schools, as did his sister and two brothers. Tom graduated from Roosevelt High School in Des Moines in 1970 and started college as a freshman that fall at Grinnell College, in Grinnell, Iowa. He graduated from Grinnell in May, 1974 with a BA.

While at Grinnell, Tom met a classmate from Chicago, Deirdre Schechtman. Deirdre graduated from Grinnell in 1975, and they were married in May of that year.

After graduation in 1974, Tom moved to Des Moines and applied for jobs in the insurance industry. Not only was Des Moines already a center for insurance, but Tom’s father Charles was a pension actuary at Bankers Life, now known as Principal. So, it seemed perfectly natural to look to the insurance industry for employment. Tom was hired by CNA to work in its Des Moines claims office, and worked there for four years, first as a trainee and ultimately as a supervisor.

While Tom was working at CNA, Deirdre enrolled in the Iowa State Veterinary College and began her four year program in 1976. In 1978, Tom entered the Drake Law School. Deirdre graduated with her DVM in 1980, and Tom graduated with his J.D. in 1981. Tom joined a private law firm in Des Moines, originally working in the business law area, but eventually handling insurance defense trial work and appellate cases.

Between 1980 and 1986, Tom and Deirdre had three children. In order to create a more stable and predictable work schedule, Tom explored corporate law opportunities, and started at the Legal Department of Preferred Risk Mutual Insurance Company in January 1987. Tom was appointed general counsel at Preferred Risk two years later and also became the corporate secretary.

During his 28 years at Preferred Risk, now known as GuideOne Insurance, Tom was in charge of the claims department for twelve years. He also ran several other smaller divisions within the company, including product development and agency administration. Tom also found time to serve as a board member and chairman for several terms on various insurance industry organizations, including the Iowa Insurance Institute, the Iowa Insurance Guaranty Association, and the Insurance and Financial Services Education Foundation.

Tom also served on the Boone Y Camp board and the Des Moines Water Works Park Foundation. Tom and Deirdre’s children have followed more or less in their footsteps, with one child attending Grinnell College, one with a law degree, and the third in a veterinary medicine field. Tom retired in January 2015 and Deirdre retired at the end of March 2019. They have three grandchildren who live nearby, and who are constant visitors to their house.