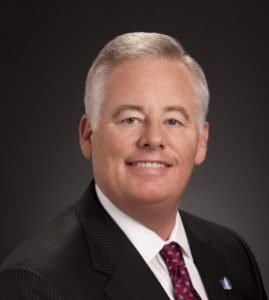 Steve Rasmussen has had a 45-year career at the Nationwide family of companies. Prior to being named CEO of Nationwide in February 2009, Rasmussen was president and chief operating officer of the company’s Property and Casualty insurance division from 2003 to 2009. He first joined Nationwide in 1998 as a result of the merger with Allied Insurance, where he served as president and chief operating officer. He joined Allied in 1974.

Steve previously served as a board member of Nationwide Children’s Hospital, American Electric Power, Catalyst, OhioHealth, where he also served as board chair, the National Urban League, the Insurance Information Institute, the Insurance Institute for Highway Safety and the Columbus Metropolitan Library, trustee for Grand View College in Des Moines, Iowa, and as co-chair for the United Way of Central Ohio Alexis de Tocqueville Vingt-Cinq Society campaign. He was also a member of the Columbus Partnership, an organization focused on economic development and downtown Columbus revitalization. Steve and his wife, Cindy, served as co-chairs of the 2012 United Way of Central Ohio campaign.

Steve earned his degree from the University of Iowa and holds the Chartered Property Casualty Underwriter designation.