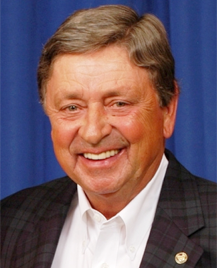 A great career is when one can take a passion and turn it into a labor of love. Stanley J. Reynolds has done just that! He is president and CEO of Reynolds and Reynolds, Inc., a full service agency with several specialty programs in both property and casualty insurance and employee benefits. Reynolds founded the firm in 1976 and it has grown from a modest staff to over 60 employees writing all lines of commercial coverage.

Reynolds and Reynolds is the largest writer of movie theatre insurance in the country. He devised a customized insurance program, Theater Owners’ Package Insurance Coverage (TOPIC), and copyrighted the plan early in his career. In 2005 Reynolds and Reynolds was voted “Best Place to Work in Iowa” among medium-sized businesses and achieved second place in 2007. Reynolds is also the founding member of Risk Pro Net International, a group of 31 independent agencies across the country poised to work in national and international risk management.

Mr. Reynolds has spent much time working for charitable endeavors, most notably the Variety Club. As past state president, he is one of four founders of the Variety of Iowa Telethon to help children of Iowa and has written and produced the telethon for the past 33 years. In 2010 the telethon tallied over $3,000,000 and has raised in excess of $86,000,000 since its inception in 1975.

In 1994 Stan received the Variety Club of Iowa Humanitarian Award. Other recognitions include Socially Responsible Entrepreneur of the Year, Boy Scouts of America Distinguished Iowa Citizen Award, and the B.V. Sturdivant Award from the motion picture industry. In 2006, he received special recognition from the Des Moines Chamber of Commerce and the Des Moines Register for community involvement.

Reynolds has appeared on telethons through out the nation and in Canada. He is a member of the Bankers Trust Company advisory board, Greater Des Moines Community Foundation, Variety–The Children’s Charity of Iowa board and Variety International board.