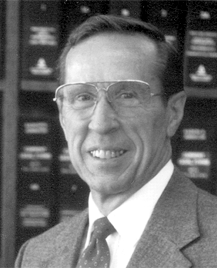 Russell D. Dent began his insurance career with Inter-State Assurance in 1949. He worked in all phases of the company’s operations, ultimately becoming vice president in 1958. In 1962, he joined Farm Bureau Life Insurance Company where he held positions in underwriting, claims, policy development, sales and education. He retired from Farm Bureau Life in 1994 as underwriting and claims vice president.

He is a past president of the Central Iowa Association of Health Agents, the Iowa Health Underwriters, and the Disability Insurance Training Council. He is a past chair of the LIMRA Health Committee and past chair and trustee of RHU. He served on the executive committee and as vice president for the International Association of Health Underwriters. During his years of service he was recognized nine times with service awards by IAHU, and was a recipient of the Tracy M. Lounsbury Award for contributions to the health industry and agents’ organizations.

In 1992, he received the Harold R. Gordon Memorial Award, the most prestigious award given to an individual by the health insurance industry.

Russ has been active in his community, serving as division chairman for United Way of Central Iowa, and is a past president and chairman of the board of directors for Junior Achievement.