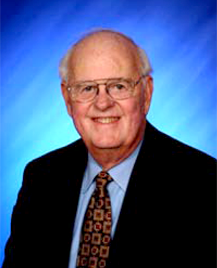 Robert Verhille is highly respected for sharing his expertise in the insurance industry and local community, as well as through state and national affiliations. His career achievements have earned him the prestigious John Newton Russell Memorial Award, presented annually by the National Association of Insurance and Financial Advisors (NAIFA). As the industry’s highest honor, it serves as a fine tribute to Bob’s exemplary career.

Following graduation from the University of Iowa, Bob began his distinguished 39-year career with the Kansas City Life Insurance Company. He is a life and qualifying member of the Million Dollar Round Table. His former agency is part of TrueNorth in Cedar Rapids. His list of industry memberships, honors, business positions and civic and community involvements reads like a history of the major industry initiatives designed to benefit the industry and the insuring public. Bob was the first Iowan to receive the following: the John Newton Russell Award; induction into the General Agency Management’s Hall of Fame; the Heubner Gold Medal presented by the American College; the office of president of the Association for Advanced Life Underwriters (AALU) and the General Agents’ Managers Conference (GAMA); the position of chairman of the Life Underwriters Training Council (LUTC) and of the Agency Management Training Council (AMTC).

He was instrumental in the creation of the Life and Health Insurance Foundation for Education (LIFE) established by the industry’s reputation taskforce. During his year as president of the AALU, Bob formulated the political action arogram to involve AALU members in the political process.

In his retirement, Mr. Verhille remains active within the industry. He continues to chair the audit committees for NAIFA, AALU and the LIFE Foundation. He remains active in economic development and numerous nonprofit organizations. In his dedication to the insurance industry and the community, Bob has been a tireless role model. Colleagues, community and civic leaders, and even his competitors speak of Mr. Verhille’s commitment, dependability, insight, high ethical standards, and his diligence and care in serving customers. They describe him as “the best of the insurance industry in Iowa” based on his unique contributions to the industry, the improved lives of thousands of Iowans who benefited from his work, and through his stellar leadership in his community. Mr. Verhille brings passion, intelligence, and integrity to each person and situation.