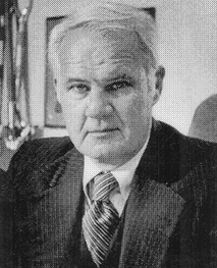 What do Des Moines landmarks like the Civic Center, the skywalk system, the Botanical Center and the Oakridge Neighborhood have in common with Iowa’s insurance industry? All of them share an extraordinary advocate in Richard Olsen, former agency manager for the Des Moines office of The Bankers Life Company, now known as Principal Financial Group. Olsen was the youngest manager ever to be appointed by The Bankers Life in 1960. Under his leadership, he led his company in commissions for 29 years, ranking his agency as larger than 800/0 of all insurance companies, and placing $1.5 billion of insurance in force.

The recipient of countless insurance field management and civic service awards, Olson was the first manager to be inducted into The Bankers Life/Principal Financial Group Agency Managers Hall of Fame. His commitment to the local community is legendary, having served as a city councilman and a two-term mayor, during which Des Moines was named an All-American City. Richard Olson’s unwavering integrity and commitment to his community and to his profession have contributed positively to the lives of thousands of people, and his career stands as a benchmark for the entire insurance industry.