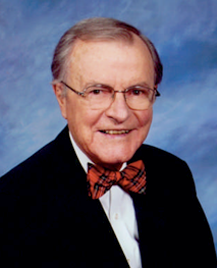 Larry Matthews has had a long and distinguished career in the insurance industry that began when he joined the Witmer-Kauffman-Evans Agency after he graduated from Drake in 1947. He was a producer and later the major owner of the agency known for its premier reputation. He was with the agency until 1982 when it was sold to Kirke-Van Orsdel. He continued to consult with KVI until he retired in 1987.

His son commented about the way he saw his father treat his clients saying, “He truly engaged in insurance in a day when it was very much a personalized service industry.” He wrote of countless nights when his father would leave the dinner table to make house calls to visit with concerned clients regarding losses they had incurred.

He exemplifies the value of lifelong learning beginning when he received his Chartered Property & Casualty Underwriter (CPCU) designation in 1951. He was one of 200 that passed that year. He was one of ten founding members of the Iowa Chapter of CPCU having its first meeting in January 1952. He served as the third president of the chapter. He has continued his involvement with the CPCU chapter well into his retirement. After receiving his CPCU, he taught insurance courses at Drake University. He went on to receive his diploma in risk management in 1968. His desire to learn continued in his retirement as he audited more than 30 hours of courses at Drake.

Community service is a large part of his life. Among his many activities, he was associated with the Drake Relays for 37 years, serving as clerk of course for 15 years and on the Drake Relays committee for 25 years. He has been active in his church, serving in many volunteer capacities and involved with numerous civic organizations.

Another Iowa Insurance Hall of Fame inductee, Louis Burkhalter wrote of Mr. Matthews, “His ebullient personality and his common sense made him a valuable figure in the insurance organizations in which he was active and a prominent figure in the conduct of insurance business in Iowa and countrywide.”