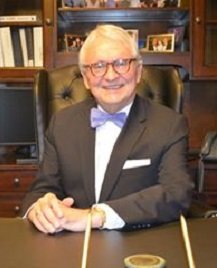 Following a distinguished 48-year career in the insurance industry, Larry Jansen retired in December, 2017 as president of Grinnell Mutual. Larry received his bachelor’s degree from The University of Iowa and he holds the Chartered Property and Casualty Underwriter (CPCU) designation.

In 2012 Larry was named president of Grinnell Mutual. Following leadership changes and three years of unprecedented storm losses, Larry used his experience, vision and energy to develop a strategic plan to make necessary financial changes and reengaged both customers and employees. Due to this strategic plan, Grinnell Mutual returned to financial stability and experienced record-breaking profitability in the last three years of his presidency.

Within the insurance industry, Larry has been instrumental in the establishment and continuation of the Iowa Fair Plan, the Mutual Association of Iowa and the Iowa Automotive Insurance Plan. Larry’s accomplishments at Grinnell Mutual over the past 38 years are many and his vision and innovative leadership extend to the community of Grinnell where he continues to support the Grinnell Regional Medical Center, Grinnell United Way, Grinnell Newberg Community School Board, St Mary’s Parish, Leadership Iowa and the Grinnell Mental Health Board.